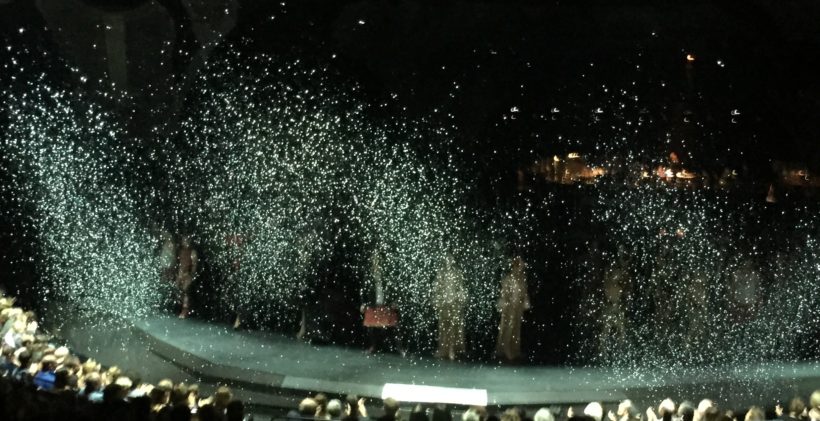 About chasing a Dream and Rainbows and Unicorns and Lies

„Is a dream a lie if it don’t come true or is it something worse…“ I remember listening to Bruce Springsteen’s song The River for the first time and this line stuck. It was October 1980, I was 14 years old and really into puzzling about the meaning of life. This line stuck, it sort of engraved itself on my mind and from then on popped up in all sorts of situations.

I had many dreams then, and only few were keepers, less came true. One of them was the dream to be a published writer, to be able to live off that profession.

In 1980 though I didn’t think being a writer was a real profession. You couldn’t learn that, could you? There was no college for it, no university teaching creative writing. And no published author took on trainees. If there wasn’t a certificate, a diploma it could absolutely not be a profession, right?

So maybe this dream was a lie. No matter if it came true or not. Or maybe even something worse?

Lie or not, I could not give up trying. I studied political sciences to have a real profession as a backbone but in my secret life plan I was going to be a writer and any other aspired bread job was my clever excuse for not having to discuss with my parents that I was pursuing what my father called “fluff” (what he meant is his daughter being utterly stupid and probably completely out of her mind chasing rainbows and unicorns).

To cut a long story short it took me writing more than five novels for the drawer, hundreds of rejections, a lot of heartbreak in between and aging well past 45 before a publishing house bought my first novel.

There it was, the dream coming true. And then the book flopped selling only some 3.500 copies, and the dream was not a lie but something worse.

I dealt with fate (and I was not handling that too well). I raged, I cried, I despaired. Not because of the sales numbers but because when my agent tried to sell the next novel all publishing houses went “uh-oh, rather not, you know the sales of the first one…”. It’s not fair I told everyone who wanted to hear it (and a lot of people who didn’t want to, too). It felt like fighting ghosts I could never grab but who managed to hit me each time they tried.

It was the dream coming true that turned out to be a lie or something worse. It was my father and each person who ever told me I’d never make it as a writer (and there were so awfullly many) being – fucking right.

After all the crying and raging was done I told myself it’s time to admit defeat. It hurts, yes, but I’m not going to die. The world won’t stop turning, my life will go on. And, at least I have a decent bread job. That’s more than a lot of artists can say about themselves.

I took a break of writing, not sure if I’d ever go back to it again. And completely forgot about my agent still trying to sell that novel of mine.

I started to enjoy more social life now that I wasn’t spending all evenings and weekends in front of my computer in my parallel world of fiction. I allowed myself to get lazy and dove right into all the books I had not found the time to read during the last years. And step by step my little mourning process brought me to the other side where I could envision a life in which I am not a writer, at least not not one who lives off it.

And then my agent sold my second book which came out and went straight up to number 27 in the Amazon ranking. In fact it did so well during the first two weeks that my publisher asked me if I were already working on a new one and when they could read please.

Another dream coming true that is a lie and maybe something worse?

At this moment in my life I had let go of all this wanting to be a professional author thing, and now the door started to open. Worse, I had turned away from love stories and written a thriller no one wants to publish. They want me to be the newest romance queen and I want to scare the hell out of readers.

What’s that, fate? A joke? Well, I’m not laughing.

After more than a week of tormented sleep and the fearful question if I will close a door forever, if I throw away the chance to get what I always wanted when I stick with the thriller thing I concluded the one truth:

I’ll be 52 in a few weeks. Maybe I’m more a political scientist than a writer. Consequential, as a novelist I have a message. I have something to say, and that is a political and societal statement. And it matters to me. An awful lot. And it can be done in a thriller, not when she and he walk into a sparkling sunset on a paradise beach.

What really helps now is that being a writer isn’t my dream anymore. I’m there. I’m published. Twice. Hey, I’ve even been bestselling for at least two weeks. And guess waht, my happiness doesn’t depend on it. I don’t have to prove my father and all the others wrong. I don’t have to be right. I can let it happen and if it doesn’t, so what? I’ll still be me.

And I’ll still be able to say that probably Bruce Springsteen is right. Maybe a dream that doesn’t come true is a lie, maybe something worse. But I can add that a dream coming true can be a lie as well and – something worse.

And that being a fact  let’s face it. Nothing wrong with chasing dreams, rainbows and even unicorns. Indeed, we should chase our dreams but the emphasis is on dreams (not dream) because believe me, it’s a good idea to have other dreams in your pocket in case one of them becomes a lie or something worse.

Chase your dreams. But don’t let them chase you.