I still remember that one scene in „As Good as It Gets“ in which Jack Nicholson said „in the long run I’m irresistable“. I remember how I was stunned and laughed at the same moment. And how I thought that this might be the best statement I ever heard.

Nicholson was playing the misanthropic author Melvin Udall, a cranky, bigoted, obsessive-compulsive pain in the ass, whose life gets turned upside down – first by his neighbor’s dog, then by the waitress he falls in love with.

At the time I saw the movie first, when it came out in 1997, I was an unpublished author since 1982 when I, at sweet little sixteen, had handed my first novel over to the owner of a famous Berlin bookstore who knew everyone in publishing plus many awarded and well known writers (besides being the uncle of a a good friend of mine).

The bookstore guy whose name I can’t remember now, did read my surely horrible some 150 pages and handed them back to me saying I should go on writing but that this story wasn’t good enough to offer it to publishers. 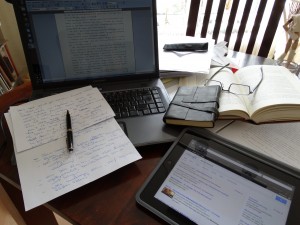 Needless to say, I did go on. I wrote and wrote and wrote. At some point I started to offer my work to publishers. I took rejections by the bucket, each a hard blow to the stomach, a knife twisted and turned, but I never stopped writing.

I went to creative writing classes and wrote, wrote, wrote. I suffered more rejections by publishers and literary agents. My heart choked, my soul hurt but I never stopped bleeding words on paper along with my pain.

Somewhere in between I must have gotten better, but boy did I take my time. It was 2013 when I convinced an agent who then sold my first novel Eine Liebe in der Bourgogne that was published in December 2015. Now, two years later, my second novel Gesang der Zikaden hits the shelves.

So what are the similarities between Jack Nicholson alias author Melvin Udell in „As Good as It Gets“ and me, the not misanthropic author whose life has been turned upside down more than one time but never by a dog? I guess we can say, in the long run I’m also irresistable – to publishers. But I think it would be more accurate to say that what links Melvin and me is perseverance.

We both don’t take no for an answer. We both go on, no matter what. We fight for what we want and for what we believe in. We hang on to perseverance and persistence bordering on stubborness. And yes, maybe I too sometimes am a pain in the ass. But in the long run we are not only irresistable, no, we get to where we wanted to be regardless how long it takes.

I’m not there yet. I’m far from being able to live off my writing. But no matter how often I heard – even from family and friends – that I’ll never make it, that I’ll never get published, I’m there with book two.

And even if my life has never been turned upside down by a dog, it has been by falling in love. A story just as unreasonable as trying to make a living out of writing for a girl from a poor working class family. Especially since my heart and soul choose someone my sound mind instantly concluded to be completely out of reach for someone like me. But I won’t give up. In the long run I will be irresistable and all and everything will be…

As Good as It Gets